Coffee and Bakery places are popping up in KL.  I am always a big fan of such places particularly if you have studied long enough overseas where the culture of popping into a cafe is like a common past time. Most attractive of such places is the smell of coffee and fresh bread wafting away in the shop. Friends working overseas also have been plugging Korean coffee culture to me ( however, we are unfortunate not to be graced by the likes of Caffe Bene, or Angel-like-Us and Cafe Tiamo ) but 1/2 similar to it i am fine.

I found this place via KampungBoyCityGirl, in the far reaches of Ampang, a sole Korean Bakery called Nabe Bakery and Cafe among all the korean bbq places. The ahjeossi manning the shop has been in malaysia for almost a year, and it seams he runs a similar business back then in Seoul. Guess the standard of living in KL is by far better(Translated: Cheaper) than in Seoul. Sometimes i wonder what makes people up and leave your country like that. 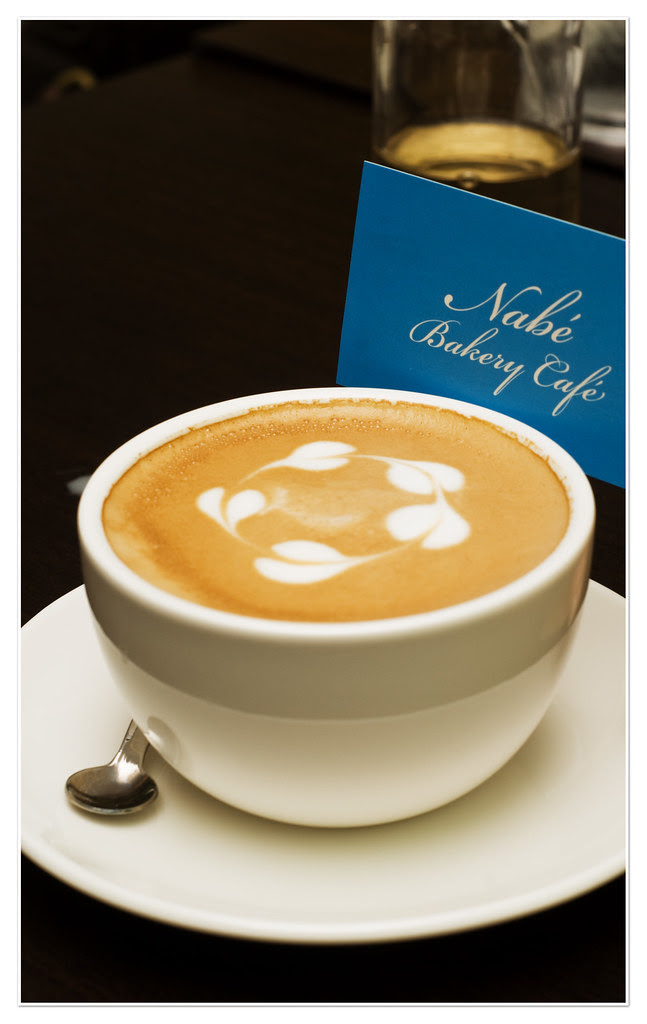 A word of warning though -if you are looking for early breakfasts, please note, he only gets his engine going by 12pm :)  The shop is pretty simple, nothing fancy. You can choose to have fresh bread, pastries or go for sandwiches or pastas.  My friend and i decided on bread. [ How i wish he had waffles ] 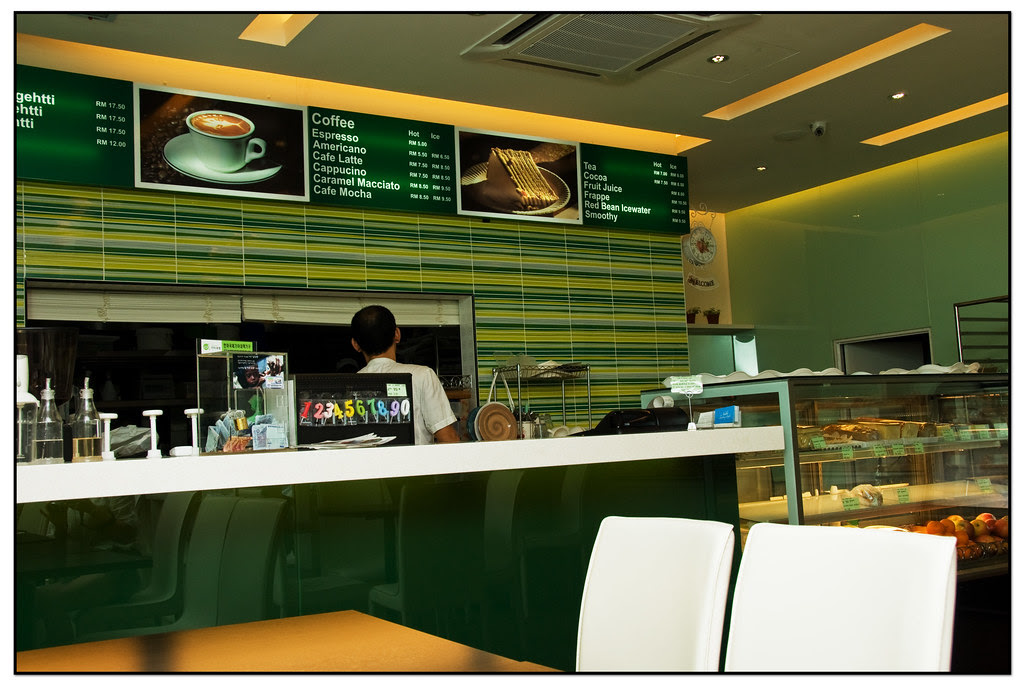 That's Ahjeossi in the background, looking at his one sole helper that day. Ahjeossi doesn't speak really good english but he is a cheerful soul who will willing try to explain to you what the bread, pastry is made of. Funnily enough, when my friend and i walked into his shop, first thing he asked the both of us are "Are you Korean?". (?_?)  Must be thinking - " ah crap, have to speak in English now" ... However, don't be put off, as he has little sign on his shelves giving you a clue of what that pastry is! While I thought this place may be a bit far to attract a lot of attention, turns out local Koreans flock to this place to buy his breads. They must miss their type of bakeries. Now if only more will flock to less far off areas such as PJ/bangsar or hartamas.

We decided to pick a few bread that was at the shelves ( some needed a bit of warm up ) to have for lunch and call a patbingsu later. A very Korean dessert i would say is a Walnut Tart. I have to say it is an acquired taste. Initially i thought it was okay but takes one or two more bites for me to give it a thumbs up.  That purplish bread next to the walnut tart is Taro Bread. I found that interesting. Normally i am not a fan of Taro except for in the form of Yam Basket and Yam Cake but i thought the Taro Bread is interesting! 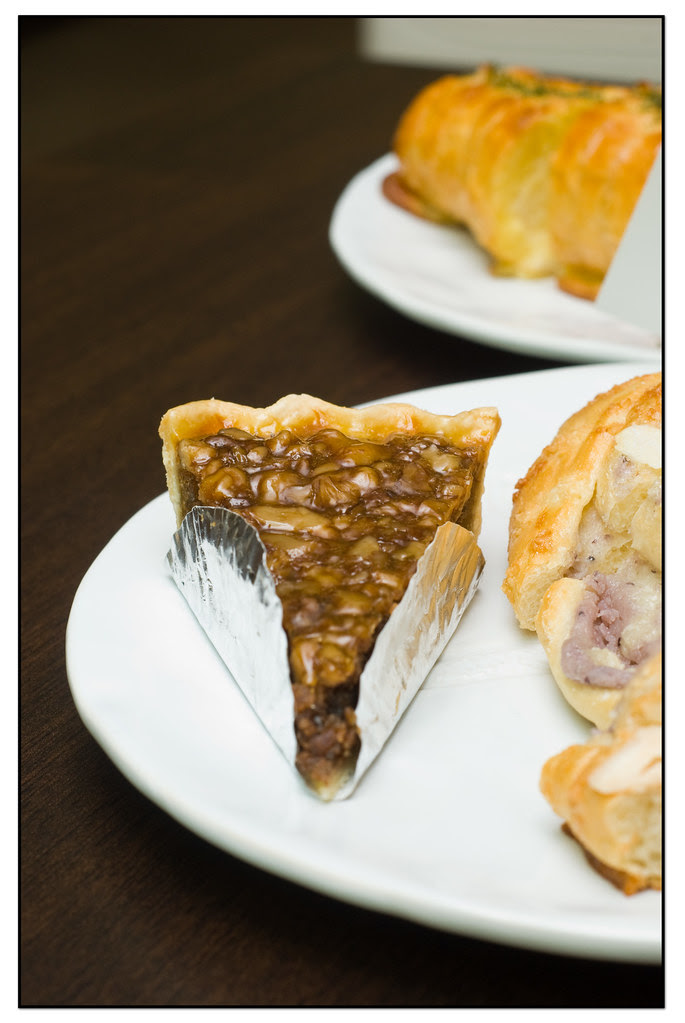 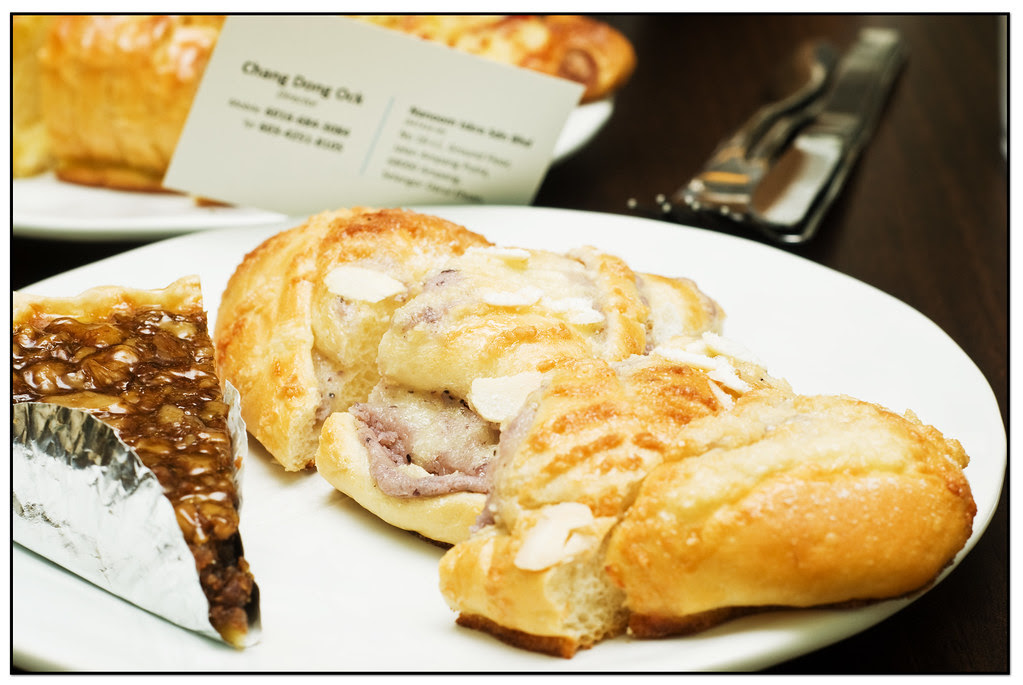 Another shot of the Taro Bread - looking a bit over exposed. [ The picture that is ] If you need a bit of warm up for your bread, there is a microwave for you to zap your breads :D 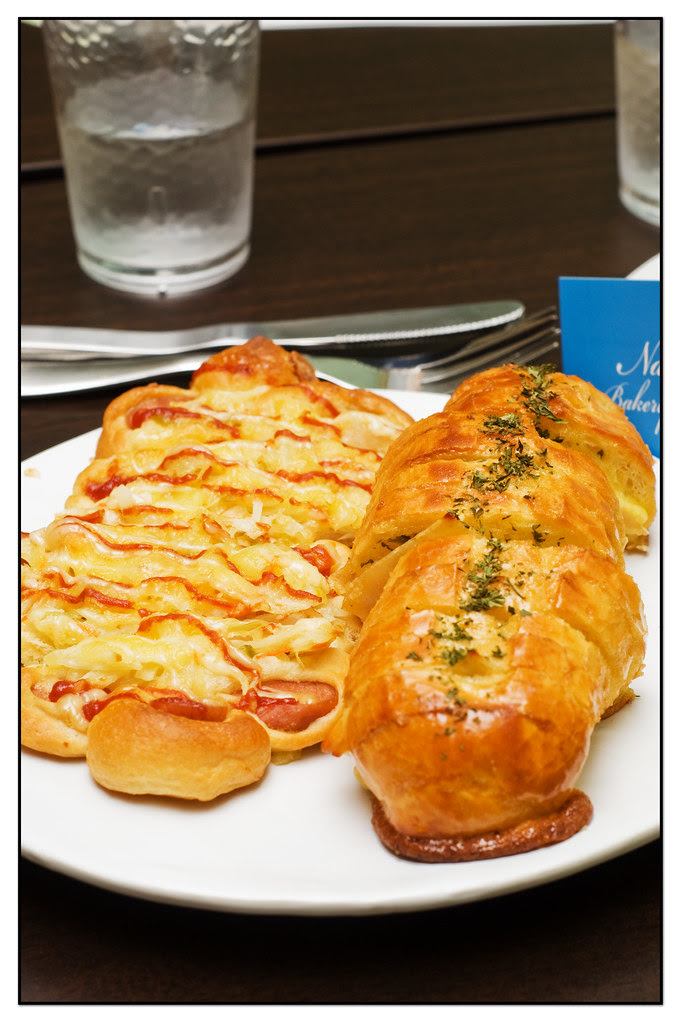 I think this is Hawaiian Pizza bread and Garlic Chicken Bread. Pretty nice. I like savory breads! The bread here is extremely soft and fine not like those in the Roti Boy type.

Koreans also have "ice kacang" which they call Patbingsu. Kinda less creamy version slightly healthier. Lots of fresh fruits here in this and of course a dollop of red bean and rice cakes. Don't be fooled by the picture, it was an extremely large bowl of patbingsu - good for 2 persons. It was quite interesting to have mochi/rice cakes in a ice dessert but it gives this dish that strange umami kinda of taste 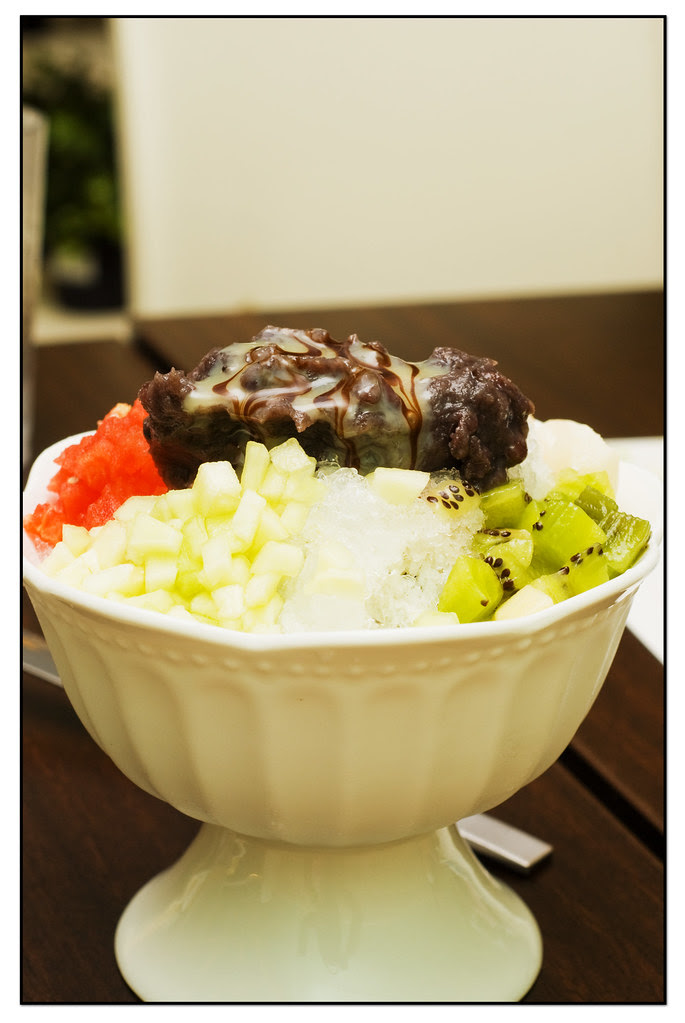 I had expresso after that ( which was quite strong, was like an owl after that ). Ajeosshi's wife is the person who mans the Patbingsu machine and the barista as well. Here is a sample of her coffee art. Not sure where they get their beans from but according to my friend, this is the typical type of beans they have in korea and it is normally quite strong and flavorful.

Later we bought a bread made from Glutinous rice (fresh made that day ) - that is quite a staple in Korea. I can guarantee you this shop does not use a lot of preservatives in their bread, my last small piece of the Glutinous bread which i forgot to finish actually fat mou about 2-3 days time :) Good news for me no preservatives - bad news, before i put food in my mouth must check first if got blue dots!

If you are looking for something different in the area of Little Korea, drop by to Nabe Bakery and Cafe.