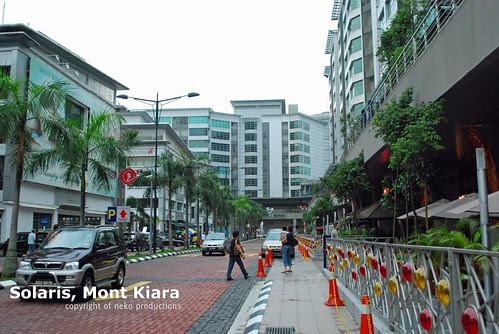 It's amazing how some plans can go awry. This happened to be a EPIC FAIL in my books of planning. T'was mom's b'day an we planned to take her to Mr Ho's Fine Food in Solaris. Well guess what?? We got lost ... and finally when we reached Solaris.... there is no Mr Ho's fine food! What the.... I have to say getting to Solaris is not easy... why is the road so complicated! You should see my mom's face when we started making more wrong turns. If hell was freezed over by looks, hell was frozen that day.

When we finally reached Solaris... i thought my problem was over.. Anyway, we got slightly distracted by the sight of the nice properties in Solaris + Mont Kiara... If i was a rich kitty, this is one area i would like to stay. Despite being difficult to get here. It's continental ( lots of good food, plus some good looking people there as well ) and quite.. However budget is a big issue if you think if of it. I heard the places goes in millions here... oh well...

Back to Solaris, one thing i must say this place is packed with restaurants. There are many choices to pick from however, becareful on the budget. I noticed prices here are not cheap, it's good for a night out but if you want to eat here daily, a bigger stimulus package is required. And since this place is so... glamourous we even spotted a tv crew here filming dunno what here. Yes, i did what other malaysians do, stop and look. Since i am a blogger, i stand and take pictures as well.. Lol. 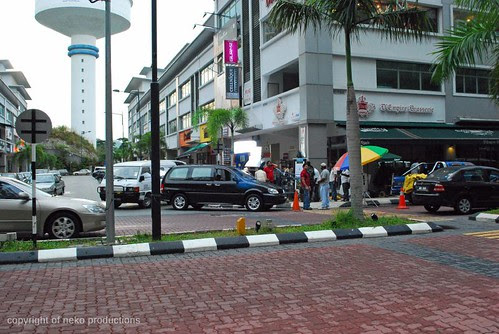 Despite not finding Mr Ho ( poor dad, i heard his heart break )... we settled on Korean food in the end. And i was not so pleased for one reason. My parents are SO SO fussy. How are they going to take to korean food. Apprehensively, we walked up 3 flights of stairs to reach Bon Ga.... and .. i suddenly felt i was no longer in Malaysia. This is a 100% geniune korean restaurants with a real korean owner and looks like 80% of the customers are .. korean. 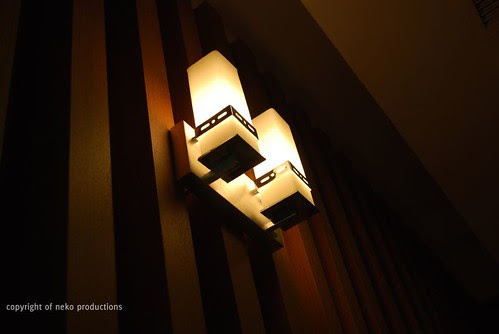 We seated ourselves at a corner with this lovely light above.. ( something i might buy for my future house ) and started taking our cameras. Yes, bro has turned into a food blogger as well of some what. And we realized that koreans by nature ... seem to think taking photographs of food is a very strange culture. We received a lot of stares from them when we did this so some where in the blogsphere., someone is commenting on this strange malaysian culture. 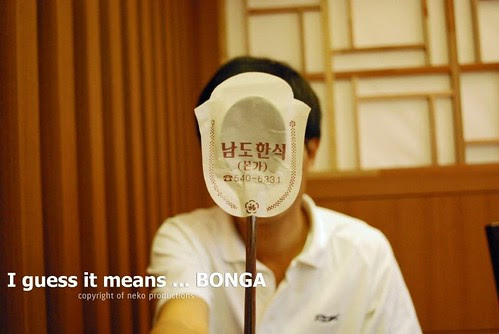 My parents, having been to korea were no stranger to korean food, however most of the korean food they had there were not too good, so fingers crossed, when the appetizers came. I thought appetizers are like small dishes ... they are but i didn't know the total dishes can amount up to 10 dishes and more! With soup thrown in. Now, not all were nice, infact any thing dangerously red was spicy to the max. We loved however, the pancake, the glass noodles and the cucumbers were not too bad. And oooh, we had refills ... some we could have done without. I forgot to take pictures of the soup ( kimchi soup ) which was quite nice by the way, it was a cold day and it warmed my insides a bit without shrivelling up my puny tummy. Dad preferred the clam soup ( which he single handedly finished it on his own - because he likes clams ) despite the slightly hot after taste. 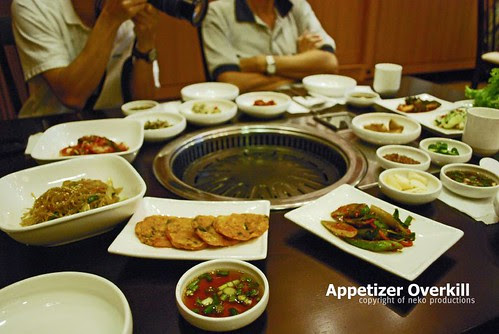 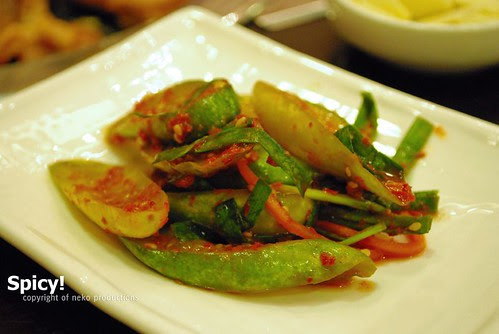 Btw, we had bibimbap which did not reach our pictures because it was next to dad and he was lazy to pass us the bowl. Oh well, it was not bad but i have eaten better in Desa Petaling ( the one i had with my ACN makan gang ). The piece(s) of resistance comes next.. pork + beef. Now we were were in quandary when ordering this, firstly i sort of freaked out at the meat prices. RM60 for a plate of beef is quite extravangant in my books. I tried to ask the helpful but english language challenged waiter how big the portion was but he kept saying 1 person... We decided to just get one dish, should we need more we will order later. 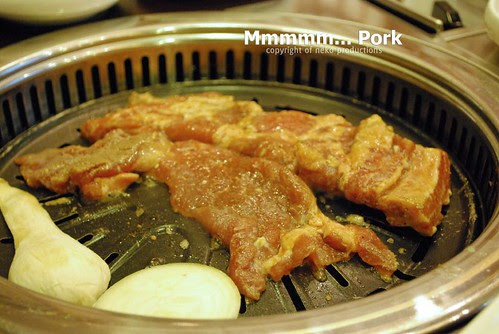 This is the three layered pork according to the menu that comes with a mushroom that looks like a drumstick and onion. This big piece was cut into smaller pieces and the waiter did the cooking ( i am glad he did - i have no idea when it will cook ) ... by then... i was starting to smell like .. barbeque meat. ( Later, when i got back, my mutts were truly in love with me, i could look like a bit fat chee yuk par to them ) Once cooked ( as below ), you dip it in a sauce, which i think you dont need to, wrap with the onion, mushroom and lettuce that was provided and eat. I was in porky heaven for a good 2-3 minutes. Such bliss. I am not sure waht they put into the pork to marinate. Mom says sugar and some miso paste was tasted but it was super excellent. I think i can try this for bbq later. Ok despite mom not liking fat food - she thought this was pretty good. Dad was just polishing it up and nodding his head. 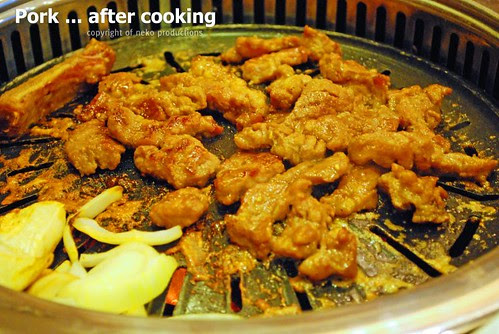 I ordered fish for everyone ( only 1 dish ) so that it balance the intense meat we are having and... i must say i think i prefer the japanese style of cooking this. It's mackerel by the way but i find it so fishy... Dad loves this fish ( seems to turn out to be more of dad's b'day than mom's tee hee ) but still edible. And it comes with rice and that clam soup my dad loved. 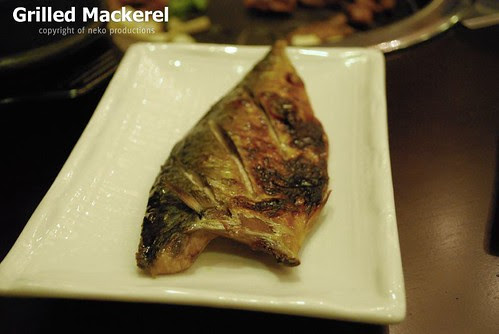 Then the beef came ( btw this plate of beef costs RM65 a plate and i think it is wagyu as it is very very tender ) and the meat is good cut of meats not like the cheap cut meats you might get elsewhere. Again it comes with the funny mushroom that looks like chicken leg, this time, dad had to try this since mom and i finished the first one with the pork. 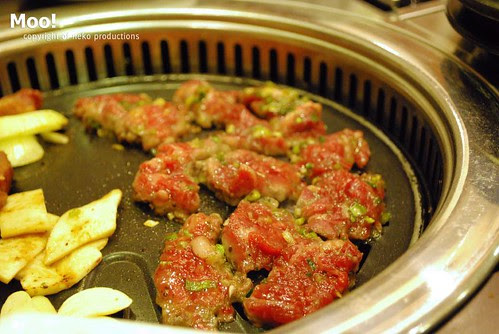 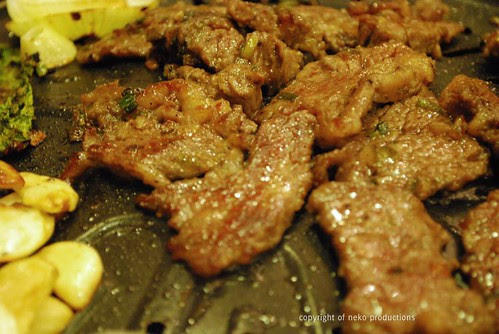 After all this i must say i was well and truly stuffed. Some gripes i have, normally korean restaurants served at the end of the dinner some barley drinks or cooling drinks but this one did not. Did not know if they don't server or forgot to serve it but would be good if that was given. After all the heaty food, i swore i could feel blisters coming up. I think the prices are in fact pretty scary, ok so i was scared. However, maybe conversion from Won to MYR this might be a steal. Anyway despite my freaking out, this only cost the 4 of us RM148. According to my dad, it's the same price as our jaunts to Chillies or Fridays.