I am back to my May posts again. I am amazed salute people who can do 2-3 posts a week. Possibly these people don't sleep!  I need my sleep otherwise i can't function the next day. And i am immune to coffee already :(
Well, skip the sleeping, this is a way overdue post on my Cousin 4's b'day. Actually, it's a surprise party of sorts and a cousin gathering. Now, those of you who do follow my blog, my eating events are either because of family events or with my makan gang ( which till now i have not found a name for them - it is either the greedy piggies or the gluttons, or big eyes, small tummy :D ) and OD gang. More often than naught, food is a time for me to enjoy my company more than anything else and i tend to forget any problems during these outings- all work talk is banned!.  In this case, cousin's b'day was planned by her sis Cousin 2, who is some what, the makan goddess in our family ( who does not blog, but makans alot )... I have heard of Leonardo's from a few fehmes bloggers, and gamely went a long with cousin 2's suggestion to have a surprise party for her sis. And this place is SERIOUSLY not halal.

Cousin 4 and i are quite close, separated in age by a few years. Heck, we even worked in the same company for 10 years! And hardly anyone believed we are related because we are as different as night and day. While she was the more refined and elegant one, i was completely either brash and loud (more on the loud bit). However, that doesn't stop us from msning each other daily or sms each other often on office gossip. Dinner events in the family normally see us yakking away loudly and laughing raucously as if we have not seen each other for a few years. Over the years, we started planning what we call "Cousin Events" for the remaining cousins who are still in KL.  Most of our cousins are either overseas, or estranged ( for some ) , or too young to join but the intent was to keep us together as a group. Often naught, Cousin 1, who flies back from overseas often is also a frequent guest to our cousin events. Also,.... cousin events have veered in the direction of being up class as well hehehehe.... since now everyone is working, we had more money than we had as kids! 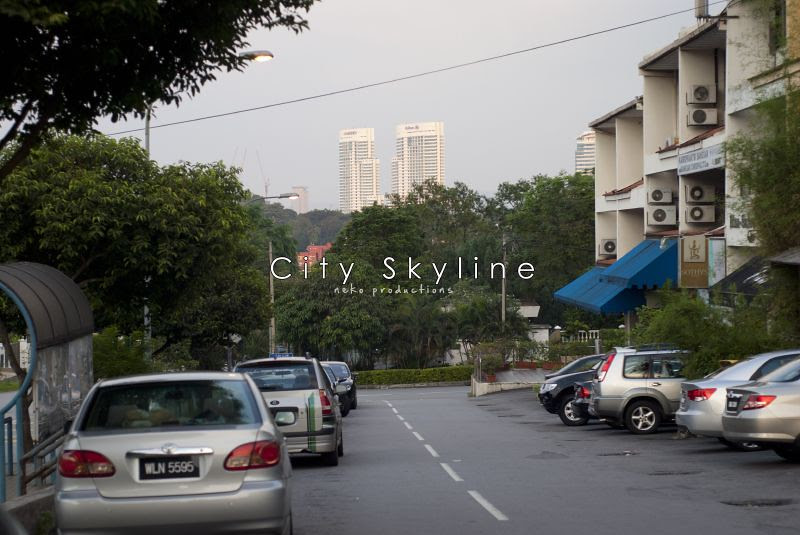 Leonardo's is situated in a quiet area of Bangsar, which i totally love. Why? Nice hilly place, with greens, and people walking their goldies... I could so live here if i have the budget to do so. And parking is good here. I am still sore on those Kayu Ara -like place when it comes to parking!

The journey here was quite interesting for me, because i exasperated Lil Bro with my rather weird name road. When asked, ( since he drove ) what is the road name i replied "Jalan Bakung"... Using maps, it showed... Indonesia!!  After a few hisses and spats, we finally found it on the and we were on the way there. And we were super early. I was assigned - the cake task - task of buying cake for Cousin 4 at Suanson's place...which.......... was close on Sunday! Neither did Opus sell a whole cake, so i decided to wing it and ask Leonardo's to prepare something for me. 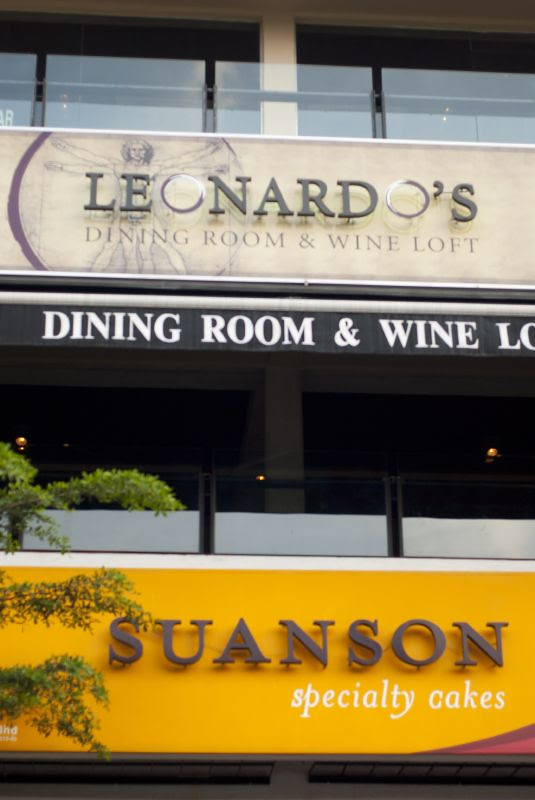 Leonardo's has 2 floors, the dining area and the wine loft in the upper floor. Obviously, we are here for the dining. It's not super big, this place but cozy. And i like cozy. Already, 2-3 tables were there and eating at 6:30pm! 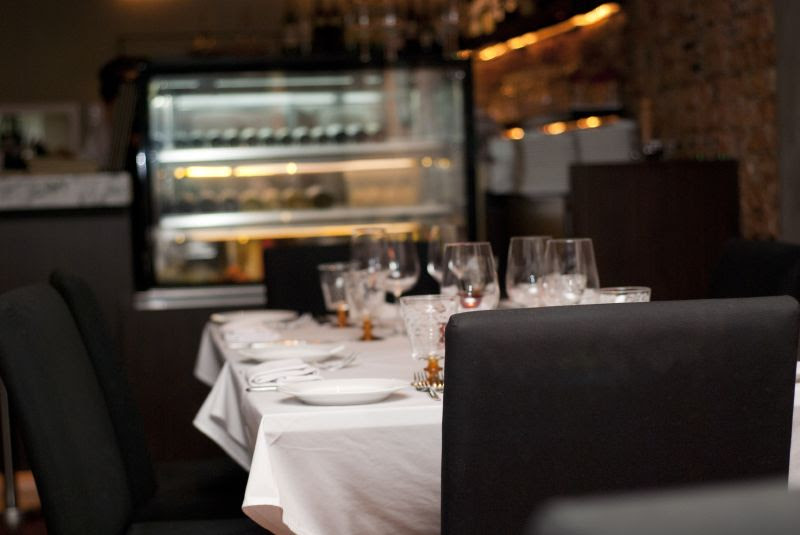 And this place is posh, i tell ya. Look at the cups and the cutlery, i was beginning to wonder if this place is in the same league as Sage or Cilantro's - hopefully not, i hope not to have a degustation menu that night. 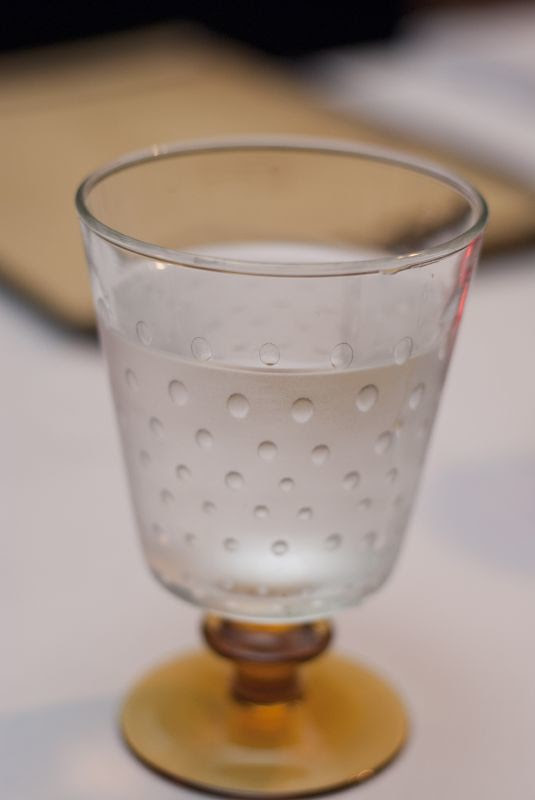 Then Cousin 2 smses to say she will be late as the Q to KFC was long... I was eh? Oh. forgot, 2 nephews were that night. No kids allowed session. Good thing to, can't imagine the two of them running up and down this place!  And thank god for GPRS ... as otherwise Lil Bro will be rolling on the aisles in boredom. 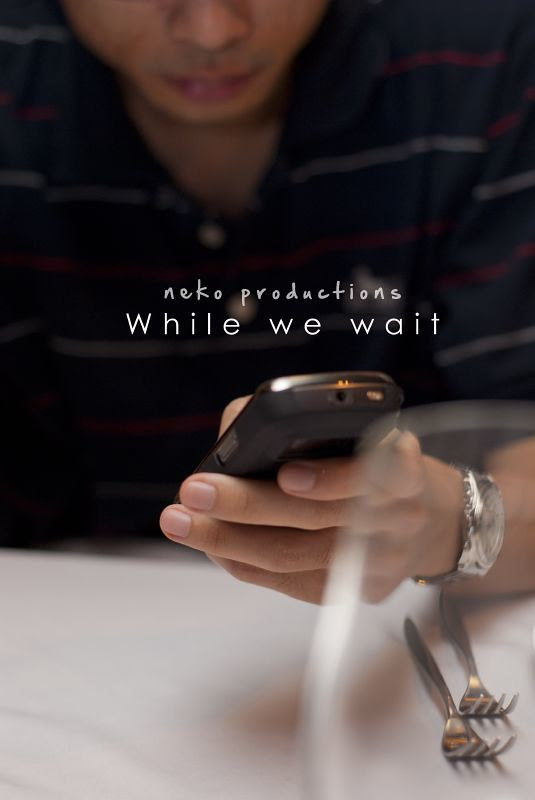 Hunger pangs were ringing about 1/2 hour later, and we decided to order a mushroom soup first. As mashi says, hungry people are cranky people and it's true, cause your blood sugar level is low, making you ... purely irritable! So to be less cranky, we had to stuff ourselves. *grin*. Soup these days, are not the canned variety anymore, a lot of restaurants take pride in making good home made mushroom soup with real and fresh ingredients.And topping it off with grain bread from Leonardo's, fans of bread and soup will be super happy campers. And funnily, my cousins ordered this dish when they came in later and commented the soup was pretty much excellent. And bread is refillable :) we had a second basket. 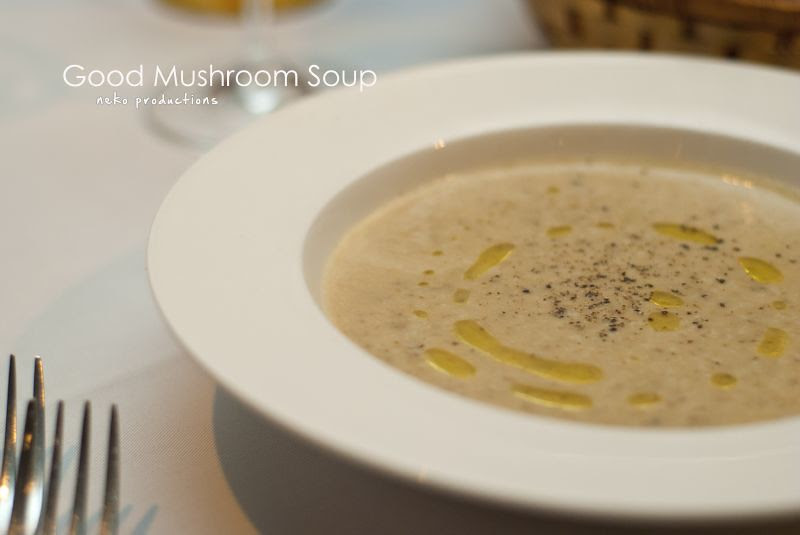 Serious ordering started and we did our usual, starters, salad and mains. And... oddly... i picked a Scallop Salad with Lychee ( no wings please on Scallop ). When the dish first arrived, everyone's eyebrows were raised. Firstly, it's a small dish of salad. Secondly, what's that green sauce? Nevertheless, with surgical precision, we cut the 4 scallops for the 5 of us to share. Actually, it is quite a good dish. I never figured out what the green sauce was but the lightly seared scallops were fresh and goes strangely well with lychee. Umami, i think was discovered today. 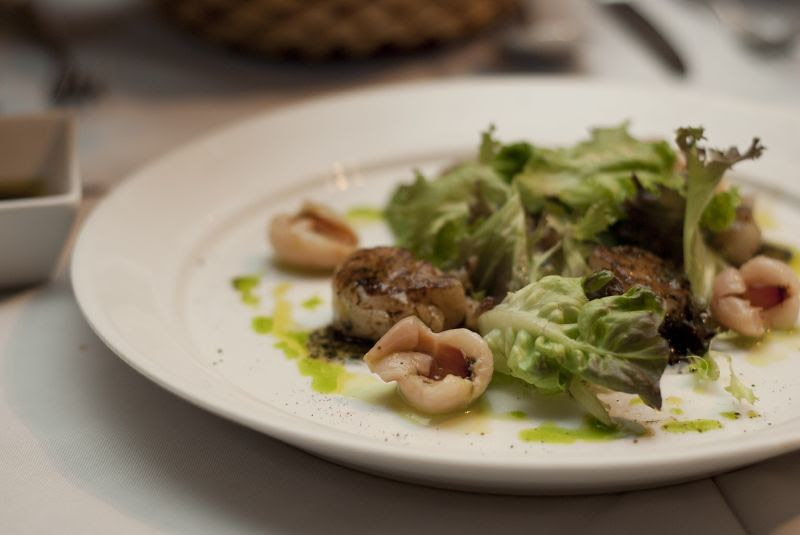 Everyone likes mushrooms in my family, otherwise we are not related, and Grilled Portobello Mushrooms with heavy toppings on top. Heavy toppings of cheese and bacon bits, looks small from here but actually the 2 portobellos are big and flat. My cousin loves the sauce dribbled on the dish itself but i have no idea what this is. 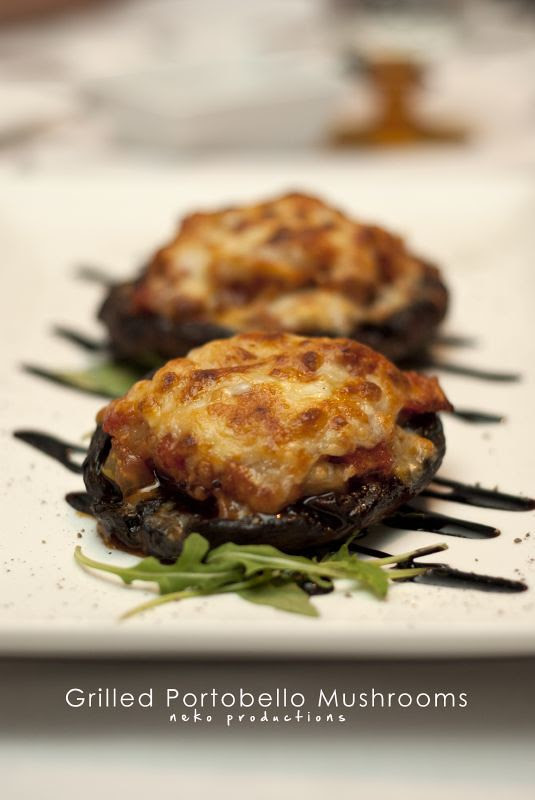 I think my family and i are a greedy lot! We had 2 pastas and 2 pizzas subsequently after all that starters. Since this is sort of a italian restaurant ( that serves bkt and hokkien noodle to boot ) we need to try of course standard Italian fare.

Our first pasta a rather asian sounding pasta, is called Ranjit's Pasta. One wonders why i can remember the menu names so clearly? Well, it's online. *Cheat* Actually, this is like Olio pasta tossed with rather fiery bird's eye chilli, garlic and lots of shrooms and ham. Or Bacon. I like this dish, not assuming yet tasty. Those who find Carbonara a bit of a mad oil machine, you can try this version. 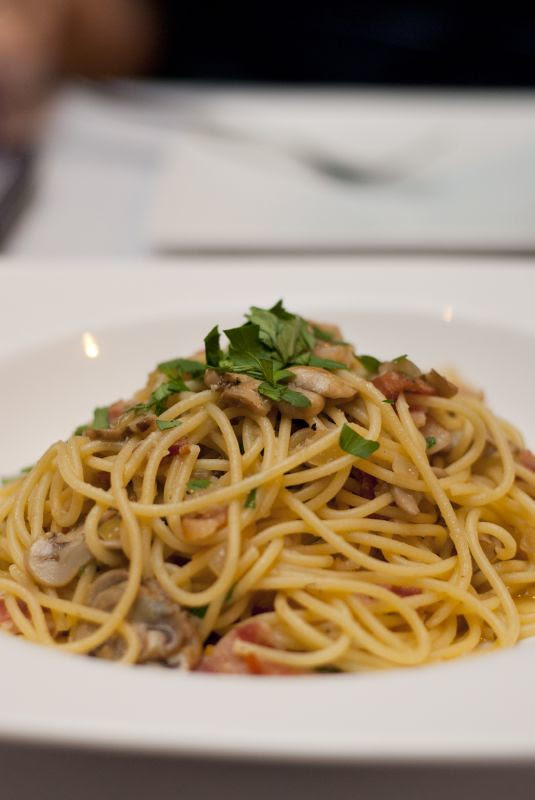 We did have Carbonara next as my cousin loves this dish.  I normally don't eat this on my own as it is really gonna be a killer on me.  But with 4 others, it was ok. And Leonardo's does this quite well without making me sick after.  It's light enough for us to eat. 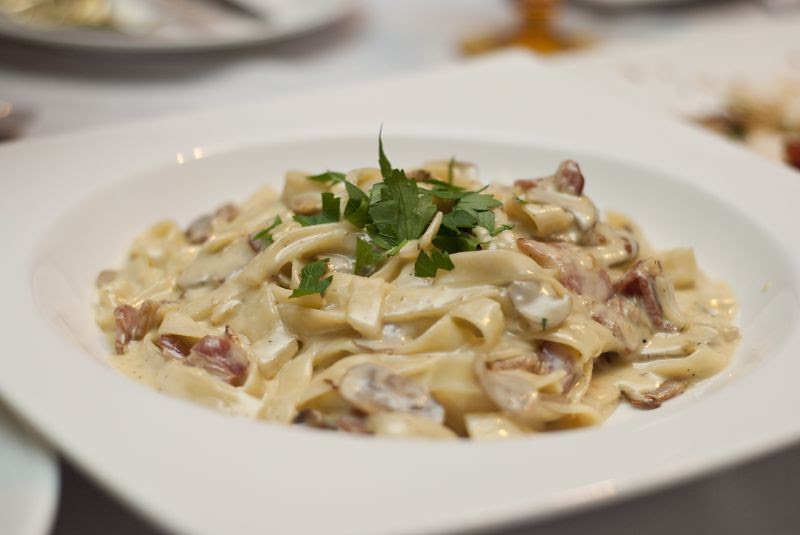 Our pizza was up next, thanking my lucky stars it is not a round pizza but a rectangular pizza, otherwise i would have been avoiding pizza like plague as per my italian trip.  I think by now, you would have figured out this place is so non halal, that most stuff is about pork. So naturally we had pork pizza which is called Mamma mia featuring Spanish ham called Jamon Serrano. Funnily enough, i tot the ham smelt and tasted like our wax duck! Which was a bit weird for me since i am not a fan of wax duck. But it adds flavor to the pizza dish. And i like the pizza base as it was thin crust.  But if you have not tried Spanish ham, you can try this dish. 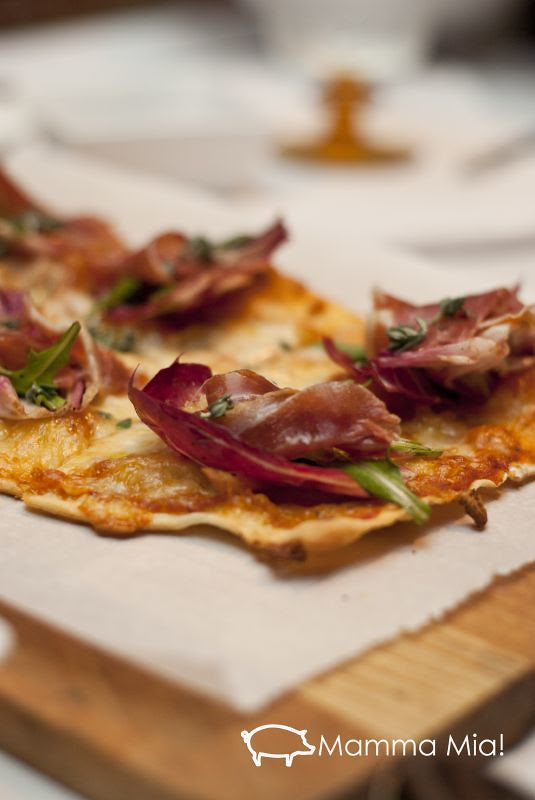 To balance all the meats, we ordered a vegetarian pizza, which was pleasantly nice. I like Leonardo's pizza because of it's extremely thin crust as it not hard but just right with enough crunch.And there is not a lot of slices which is good meaning you can eat it on it's own and yet able to share if you are having more than one. I found it funny it comes with a piece of paper underneath. 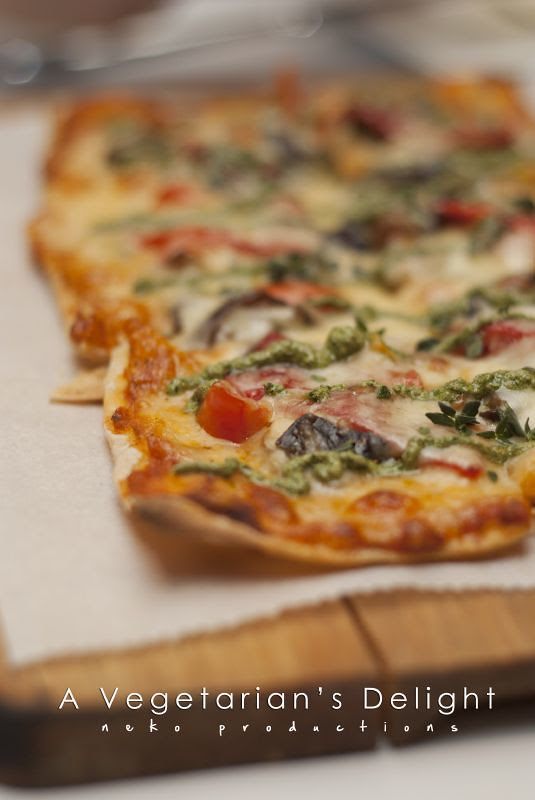 Since it was a birthday we ordered a small chocolate cake with ice cream and 1 candle :) but no pics, cause i am lazy to photoshop my cousin's name off.  We had a great time that day, actually we were pretty loud discussing TVB/Korean dramas much to my brother's boredom. (lol!)

Sigh looking at this pics make me hungry again.  I wants pizza.