Er... the first day was pretty long in my perspective. I sometimes hate rush travel because it is jam packed with serious shopping. However, at the moment we could all afford only a short holiday, so we need to make do :) After the 2 star lunch ( with some small gems ) we headed for shopping at the famous Rumah Mode. Or Rumah Moda. What is this?? Well, this is a factory outlet, and one of the best ones by far in bandung. You can find brands such as Hermes, Espirit, Burberry, Bebe, Polo, Calvin Klein TOKIDOKI ( MY FAVORITE!! ) and Armani ( for men ) and a lot more at really really cheap prices. But of course you might spend time looking through piles and piles of clothes. If you like juicy couture pink sweat pants, hey.. it's only going for 80,000 rupiah. (rm23)

Since these are factory outlets, you must know there is always some defect some where at the label or some times it is off season fashion. We started at 2:30 pm after lunch and basically only finished around 5pm. That was pretty long in my perspective after rummaging through piles, trying clothes and dragging my big ass camera bag with me. I was pooped at 4pm already and my stomach was bugging me because of the odd hour lunch time. T_T jet lag does not agree with me.

While waiting for my cousins to finish circling around in Rumah Mode ( like sharks * grin * ) i decided to take pictures on the outside of Rumah Mode. Things brother told me - don't flash big ass cameras in department or within shops. Outside is ok. So, i snapped some pictures of the statues that peppered Rumah Mode. Some how or rather me saws a *muaks* with these 2 frogs. 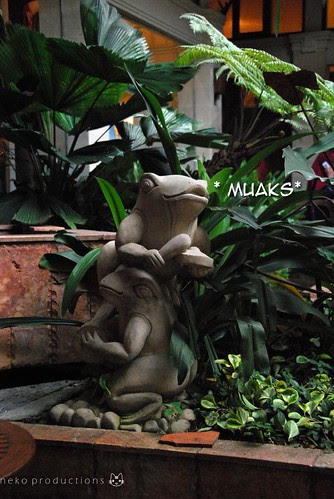 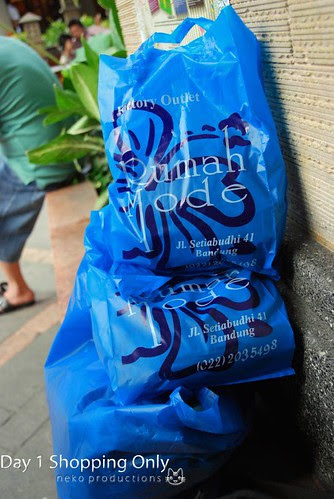 Even my shopping deserved some pictures, see, my brother and my stash. There are 2 small bags from my cousin who decided to go for a second round inside for men's shirts. At that point of time my tummy problems got a bit more painful i was just sitting down quietly. I quickly popped a carbon pill to stop any possible issues from happening. 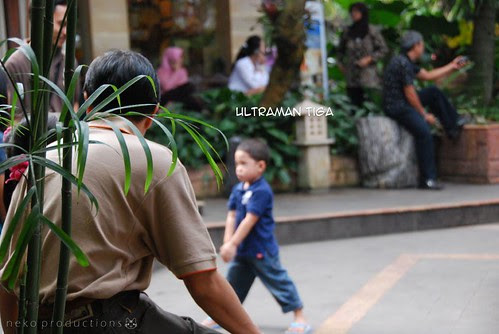 Believe it or not, there were alot of people men/ kids alike waiting outside of rumah mode for their spouses and mothers. Just like this old man and the little kid in the background was busy pretending to be Ultraman Tiga. :) hehehe kids can be quite cute at times. Once he saw the camera, he ran away. So young and so suspicious. 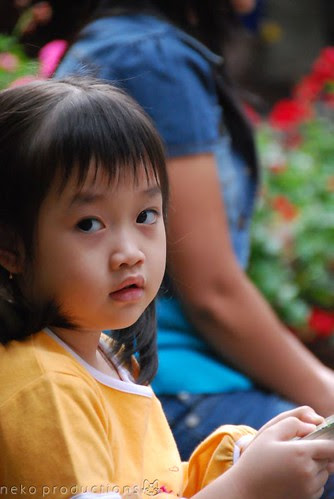 I love my 18mm - 200 mm lens. Well my brother took this, but look how good a potrait lens it is. This girl was also not happy having her photo taken :P What is wrong with kids these days! Senyum sikit lah. After about an hour my cousins made an appearance, hungry. Rumah Mode is a one stop place, not only they have shopping, they have eating places as well. And you can sample street food at slightly more pricey rates but cleaner. 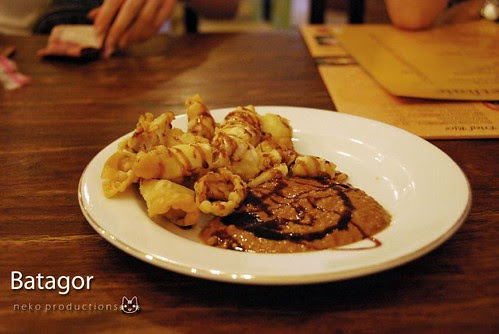 Since it was pretty close to dinner, we had a light snack which is BATAGOR. Batagor means Bakso tahu goreng shortened with the word Batagor This dish costs Rupiah 15,000 ( rm4 ) for a plate. Bakso is made of fish kinda like fish balls. And wrapped in a tahu ( fu pei ) later it is deep fried, served with a sate like sauce and kicap manis. Damn, this was pretty awesome! Simplistic as it is, this dish can be found on streets like a simple snack just like our pisang goreng. In fact, this sauce is like a big hit in Bandung. You can also find it in Bakso Siomay or sayur kekacangan.

Anyway after sitting down and hour or so, we were ready for dinner ( thank god stomach behaved ) 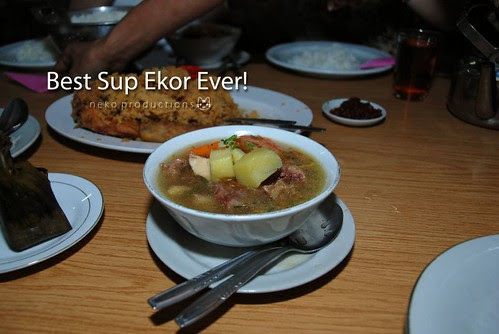 I am quite glad we ordered this, despite me not really liking the malaysian version but this soup ekor is extremely good. I just don't know what is really put in besides the "ekor" but the herbs combination used was so good and really tasted nice with some rice drowned in it. The key speciality in this place, is actually not soup ekor but actually their ayam penyet. And it means smashed fried chicken. Well smashed because it is all butterfly cut and all and deep fried to perfection. In our case, perfection still had it's head on! I didn't see it in as the head was not facing me but my cousin actually picked up the head... gross. They should have just cut off the head! 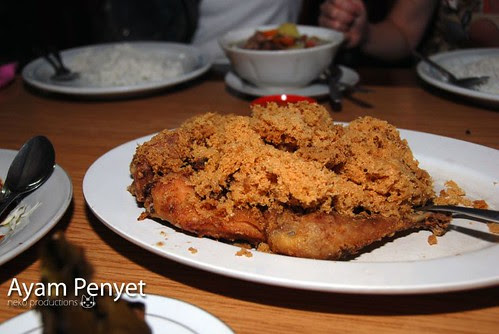 We were not quite clear what was the brownish stuff there, but the chicken was hidden under it and despite it being fried, it's not dried meat. Was pretty juicy and full of flavor. Quite sure the doused it with a lot of herbs. Thumbs up for this dish and i will try the Ayam Penyet shops in PJ for sure now. ( Hopefully got bakso :) ).

Anyway, those hungry shoppers if you like can try this lovely ayam penyet at the following place: