I am not one to simply jump and try a restaurant. I normally wait till the general mass to try it out first to give me an indication if the place is worth a try or not. Ko Hyang is one of those places that i waited a few months to try. This place, situated opposite Cold Storage and facing the organic supermarket in the lowest level of the Gardens, serves what they called real home cook Korean food. This shop is run by a mother / daughter combo. Mashi thinks one of the guys working there is the daughter's Bf... ( so much we can decipher by eating there once - hehehehe ). Oh by the way men, the daughter looks as if she is from a korean drama. Really pretty.

Now parents are a fan of korean food especially the yakiniku and we observed this shop going strong over the months. So, while we ran out of food choices in midvalley, we decided to try this korean food instead. Getting parents to go early was an issue. Dad was a bit peeved we had to reach Midvalley before 12 and i told him with good reason. Ko Hyang, does not have the space or enough table to fit hordes of people like normal restaurants do. When we reach there, the place was already pack despite it being 11:45am.

Don't expect a full blown korean BBQ going on here, with 10 appetizers in front of you. This is a small, homely operation ( i think with 6 people behind the counter )that serves up simple and tasty korean food and the appetizers are simple daikon(japanese style), kimchee and ikan bilis. I must say i enjoy the kimchee here because it was not too spicy nor salty and just right. I do think this is home made as i spotted the mother, refilling from a large plastic container that doesn't look like it came from a store. 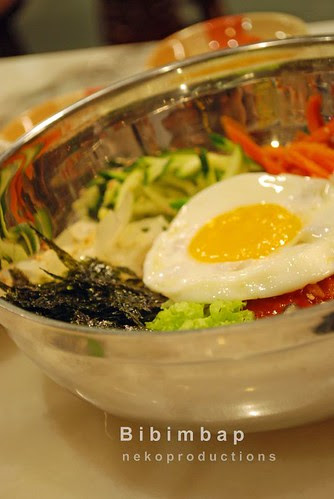 Mom ordered the Bibimbap or crackling rice she calls it. Normally served in a hot pot with the rice crackling due to the hot stone, this was served in a stainless steel bowl complete with... egg sunny side up. (?) The original bibimbap comes in a stone bowl which is extremely hot with piping hot contents in which a raw egg is served. Quickly mesh it up to get a tasty mixture. Can't imagine having and keeping stone bowls in the small shop so, metal bowls will do. Comes in flavor of chicken or beef. It was quite nice actually, despite having the egg sunny side up and won't mind trying it the next round. 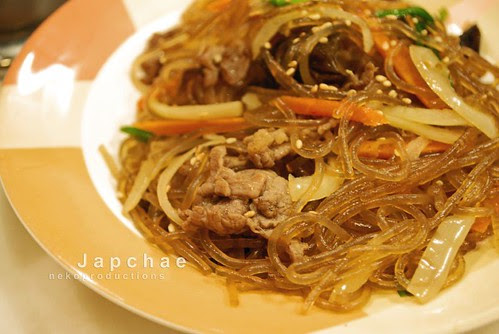 I have my favorite Korean dishes and this is mine Jap Chae, which is potato floor noodles. Actually looks like tung fun but it is not, its a lot thicker and served generously with vegetables and beef. It tastes sweetest that is why i like it. Normally you find this in the appetizers served in korean restaurants, however, you can have this as a main dish if you like. Not bad this dish, a tad bit oily here but taste wise, just like in any other korean restaurant. Exteremely fragrant in sesame seed oil.

Brother's korean seafood noodles didn't make it here. He was at the other end which i could not take pictures nor move the food. The tables are damn small! 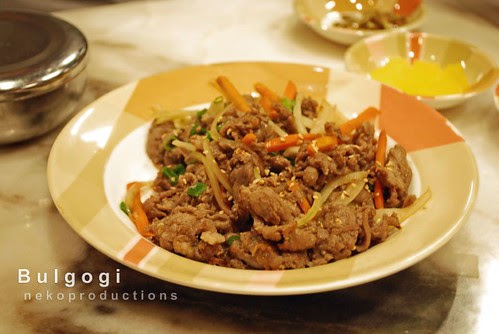 Dad's favorite all time korean food is definitely bulgogi and beef bulgogi to be exact. Now, the cut of beef is not as good as the ones in Bonga we had in Solaris, but it was not tough at least to say. Does kinda look like my jap chae hor... only without the noodles :P. Comes with a small bowl of rice. Dad polished this up in no time.

Those who eat korean food a lot, know they have drink that is pretty awesome called sik hye. Supposed to promote digestion and served normally after meals, you can get a cup here for RM3.80. I think i will get it the next time i eat here. Total for lunch that day was around rm74. Drinks being the most expensive and dishes are priced below RM20. Looking for a quick and tasty lunch, try Ko Hyang. I am definitely going back to try the korean pancakes.